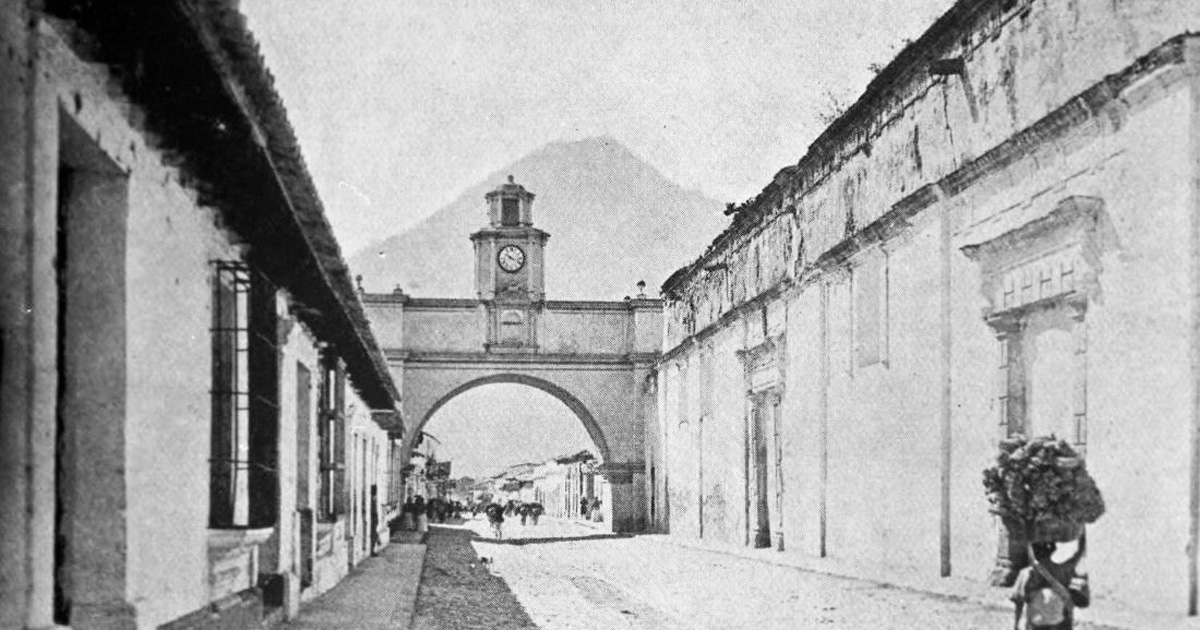 The most photographed monument in this remarkable city is, without a doubt, the Arch framed with the Agua Volcano or La Merced Church!
When the request by the Convent of Santa Catalina to close the avenue for access to their adjacent property was denied by the city authorities, the arch was approved and completed in June 1694. The nuns could easily move between the two properties without being seen by the public keeping with their cloistered lives.

The capital moved to Guatemala City in 1773, the convent was sold in 1805 and access to the Arch has remained private since then. Repairs date back to 1843 and again in 1853 by the Corregidor José María Palomo y Montúfar. The clock towers have certainly changed over the years after the first was added in 1861 and the fabulous Fuchs and Doncel clock has remained the same (built by Lamy and Lacroix, France).

The best way to follow the Arch’s history is through countless drawings and photos beginning with Harper’s Weekly (July 22, 1871). Photographers begin with Edward Muybridge in 1875 while the 1900 restoration of the clock tower is best noted in the magazine La Ilustración in 1897. The tower was replaced in 1902, directed by Calixto Guerra, and appears in Domingo Noriega’s photo prior to 1918. Rebuilt again in 1919 with city funds, another major restoration began in 1939 – 1947 under the direction of Rafael Pérez de León. A more recent restoration, completed in 2017 by Osmín de la Maza and Alberto Garín, provided new studies of the various colors the Arch – 26 in total including white, black and the most popular yellow we love today.

A visit to Antigua ALWAYS includes a view of our iconic Arch of Santa Catalina!

Send message via your Messenger App